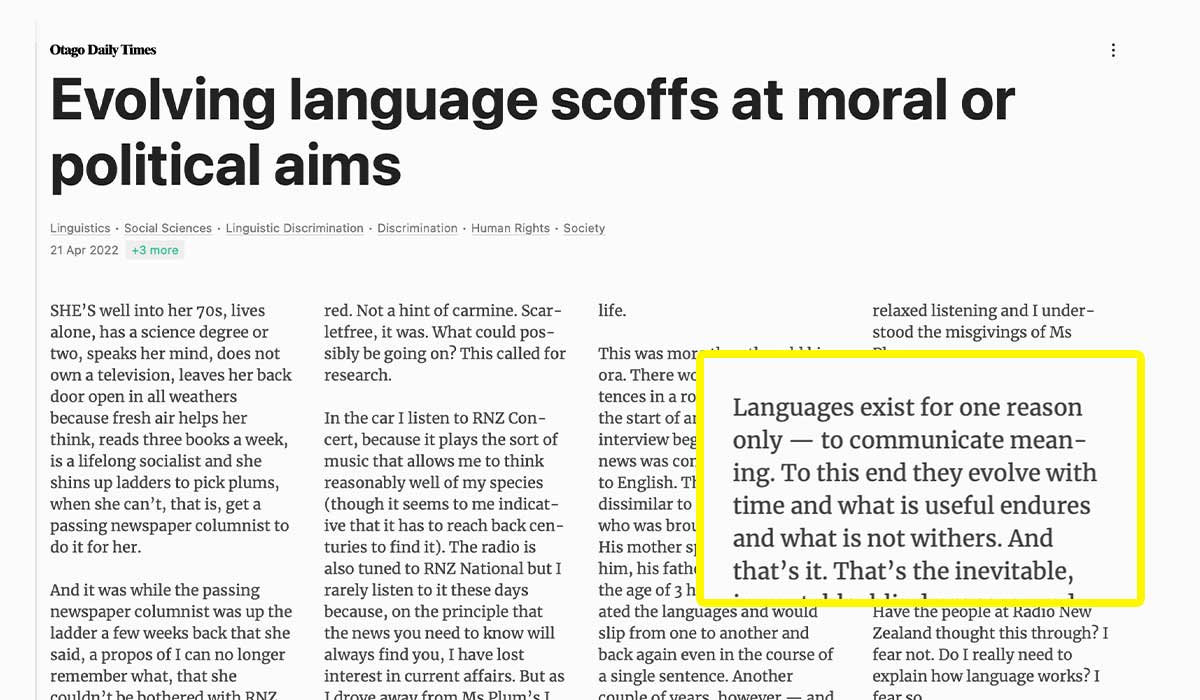 About all the Māori nonsense …

Whether he knows it or probably not, the year Joe Bennett arrived in Aotearoa from England was a milestone year for te reo Māori. After years of petitions, protest marches and activism from New Zealanders of all ethnicities as well as a Waitangi Tribunal inquiry: te reo Māori became an official language in its own land on the 1st of August 1987. This was the same day our organisation opened its doors for the first time and in a few months, we will celebrate our 35th birthday.

Just getting to 1987 was not an easy road. It was a battle that had already been fought in our families, towns, schools, workplaces, churches and yes, newsrooms for decades. In 1972 the Māori Language Petition carried more than 33,000 signatures to the steps of parliament calling for te reo to be taught in our schools and protected. Organised by the extraordinary Hana Te Hemara from her kitchen table, well before the internet, this was flax roots activism at its finest. Hana mobilised hundreds of Māori university students who along with language activists and church members from all denominations, knocked on thousands of front doors across Aotearoa. As the petition was circulated more easily in urban areas with large populations, the majority of those who signed the petition: were not Māori.  Most of those Kiwis (who would all be well into their 70s by now) didn’t think that te reo was Māori nonsense.

We know from our own Colmar Kantar public opinion polling that more than 8 in 10 of us see the Māori language as part of our identity as New Zealanders.  Today in 2022, most Kiwis don’t see te reo as Māori nonsense.

Racist, official policies that banned and made te reo socially unacceptable saw generations of Māori families stop speaking te reo. It takes one generation to lose a language and three to get it back: the countdown is on. Last year and the year before more than 1 million New Zealanders joined us to celebrate te reo at the same time, that’s more than 1 in 5 of us. We don’t see te reo as Māori nonsense.

Putting personal opinions aside, the elephant in the room of Bennett’s article is an important and rather large one: te reo Māori is endangered in the land it comes from. It is a language that is native to this country and like an endangered bird, its future depends on what we do. And from the behaviour of New Zealanders over the past half-century: it does not seem that we are willing to give up te reo without a fight. Bennett says that languages that are not useful will wither away because they exist for one reason only: to communicate meaning.

Languages are much more than this. They tell the stories of humanity, they are what make us human.

Te reo serves as both an anchor to our past and a compass to the future. It connects Māori New Zealanders to ancestors, culture and identity. It grounds all New Zealanders by giving us a sense of belonging to this place we call home. It guides us all as we prepare for the Aotearoa of tomorrow.

Our team won the world’s most prestigious public relations award last year for our Māori Language Week work because they valued language diversity much as biodiversity. The global judging panel told us in the ceremony held in London that we won because our work is critical to the future. Language diversity is the diversity of humanity and if we do nothing, half of our world’s languages will disappear by the end of this century. And with them, our unique identities, those very things that make us who we are will disappear with them. It may be nonsense to a few but it’s nonsense more than 1 million of us will continue to fight for.