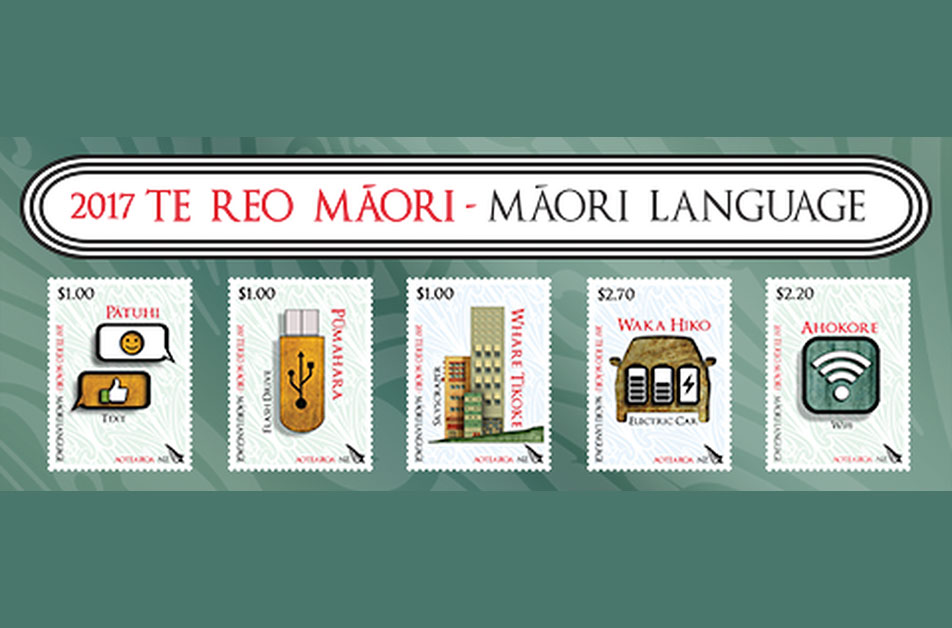 The stamps are on sale from today at PostShops everywhere and online.

They feature words like ‘rorohiko’ meaning ‘computer’ and ‘waea pūkoro’ meaning ‘mobile phone’ to illustrate the way new words are formed by translators. Artwork by Wellington designer David Hakaraia (Ngāpuhi, Ngāti Paoa) , the Programme Director for 1st year design at the School of Design at VictoriaUniversity and his colleague Elisabeth Vüllings, an accomplished fine artist.

The stamps come with explanations of the way the words were developed: ‘roro’ for example means ‘brain’ and ‘hiko’ means electricity. ‘Waea’ is an old word borrowed from English – the ‘wire’ of first the telegraph and then the telephone. ‘Pūkoro’ is an original Māori word for ‘pocket’ – so in Māori a mobile phone is a ‘pocket phone’.
The Commission Chief Executive Ngahiwi Apanui says the stamp issue illustrates one of the important parts of revitalisation of the Māori language: expanding the range of words and terms available to deal with new concepts and things.

”We are in the midst of the third wave of expansion of te reo Māori. The first was when our ancestors first arrived in Aotearoa. New words were needed for everything from snow to kiwi. Then, on European contact, thousands more words were needed for things like iron, prayer books and alcohol. Now, along with all languages we are responding to the changes brought about by technology. The Commission does this every day, as do translators and other experts.

“New Zealand Post – which has recently taken up Tukurau Aotearoa as its te reo Māori name – has helped raise the status of the Māori language and brought a new tool to teachers and learners of te reo Māori. I am sure the stamps will prove to be popular not only among Māori but among all who use, learn or admire New Zealand’s own language”.