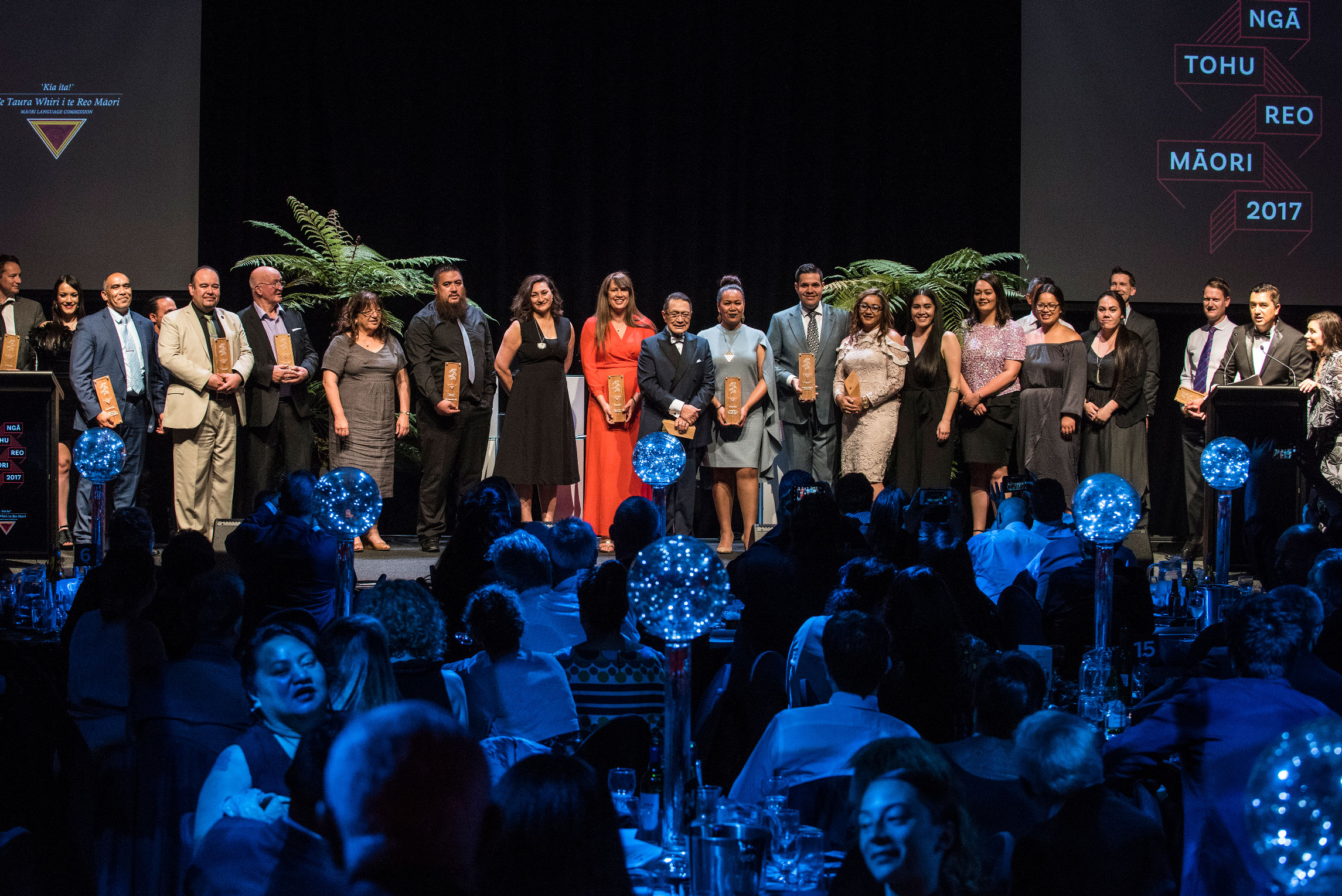 Corporate and business supporters of the revitalisation of te reo Māori have dominated the 14th Māori Language Awards attended by more than 400 people at Te Papa this evening.

Big names like Disney (working with the Matewa Trust for the Māori language Moana); Fletcher Construction (for Kāpiti roading signage); Vodafone and Google (for developing better pronunication of Google Maps); and Stuff for its introduction of tohutō (macrons) across all its platforms, were among the winners.

Law firm Wackrow Williams and Davies Limited won for their Māori Language Week promotion. and broadcaster. Auckland Watercare Services won the government category for their formation of a group to help introduce Māori language and customs into its business dealings. Jack Tame of TVNZ Breakfast was recognised for his on-air use of te reo Māori. Tūwharetoa FM won the arts and entertainment award; Te Wānanga o Aotearoa was recognised for its support for the Māori speaking month Mahuru Māori and Pāia, a youth oriented television programme by Maui Television Productions made for Māori television won two separate awards. Pāia is notable for the first known Māori language bungy-jump.

The Lifetime Achievement Award was given to Waikato University Professor Pou Temara, an educator and exponent of Māori culture and spoken arts. He was raised as a native speaker of Māori among his Tūhoe iwi in Te Urewera and has since shared this gift with thousands of others in both academic and traditional places of learning.

The Supreme Award went to the winner of the Individual Champion category Jeremy Tātere MacLeod. Mr MacLeod is an exemplar of acquisition.

He was brought up in Australia with no te reo Māori and not knowing Māori customs at all. Since coming to New Zealand in 2004, he has scaled the heights of Māori language studies, gaining an MA, graduating from Te Panekiretanga o Te Reo,  becoming a licensed translator and now represents Te Tai Rāwhiti region on the te reo Māori organisation Te Mātāwai.

The Māori Language Commission’s Chief Executive Ngahiwi Apanui says the awards show that high levels of expertise can be achived in different ways. “They also illustrate the dedication and enthusiasm of so many people to the revitalisation of our indigenous language. While we are celebrating the fact that in-family of te reo Māori is happening again in places where this stopped years ago, we should also celebrate the wonderful achievements of learners, especially those who become fluent from a basis of no Māori language.”

“It is also amazing to see the strength and range of corporate support for revitalisation. There’s an increasing sense that te reo Māori is good for identifying your business as committed to New Zealand, authentic and customer focussed. It’s alo has a strong use in team building and bringing insights from another cultural perspective for business success.

More than a hundred people and organisations were nominated; a record.

The dates of 10-16 September 2018 for the next Māori Language Week were announced at the awards. September 14 is Māori Language Day commemorating the presentation of the 1972 petition on the Māori Language to parliament. And hundreds of people now celebrate September as Mahuru Māori, in which they dedicate themselves to speaking only Māori.